How does housing sector affect GDP?

Many of us wonder about GDP and what role GDP plays to the growth of overall economy.

How the housing and GDP are co-related?

According to survey of National Council of Applied Economic, investment of each single rupee through housing sector makes an addition of 1.54 Rs. to the total GDP. Moreover, investment of each 1 Lac Rs. produces around 2.69 jobs which reflect the economy of a country itself.
Earlier in 2015,indian government initiated a scheme named ‘Housing for all by 2022’ in which there was a vision of developing 20 million houses by the end of year 2022. Making houses affordable for citizens creates employment for present and maintains expenditure for the future.

Recently in a summit, held at World Trade Center, Dubai where Mr. Vipul Thakkar, Chairman of Internation Expo Credai expressed that Indian market for real estate is on the way back after critical decisions made by government such as GST, demonetisation and Real Estate Act. Property investors are having greater confidence level now. Around 200 real estate developers from India took part in the event.
Certainly, a good sign for the housing sector to contribute towards GDP of the country. 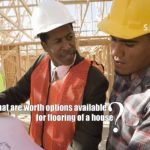 What are worth options available for flooring of a house?